I spent the first day of 2010 saying farewell to an old friend. 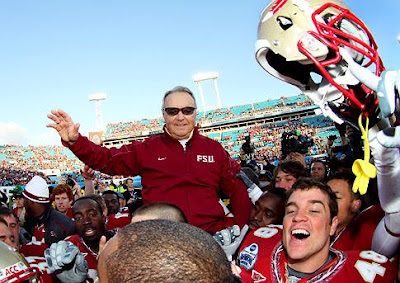 Well maybe old friend is a stretch but I guarantee thats how most life-long seminoles felt New Year's Day in Jacksonville and as they watched from home when Bobby Bowden took the field for the last time.  It was a great day full of celebration, nostalgia and most notably: victory!  Coach Bowden has a laundry list of professional accomplishments that any head coach would love to have, but his greatest loves have always been his family and his faith and football has never been his God.  My dad played for Coach Bowden so I feel a little more connected than most and have fond memories of running around the field house as a little girl long after my dad played his last down.  There will never be another coach with such a legacy, such integrity and such grace. Thanks for the memories, the laughs and the 34 years you spent building the program I love so much.


P.S.  I have pictures I took at the game but blogger isn't uploading them.  Will try and edit the post later today and add some!

and here i thought you were saying goodbye to your blog. silly me. sorry for your loss, it sounds like Coach Bowden was quite the man!

dreaming in pink and green said...

aww...I watched this game and then cried at the end...what a man...the noles will sure miss him.

I loved that he got to plant the spear! Great moment. Football will miss him. xoxo