I hope all of you had a fabulous weekend even if we aren't all ready for another Monday. This weekend was full of fun! Friday night we all went out for Cassie's birthday--dinner at CPK, dessert at sweet! and downtown to Eye Spy and I Bar. It was a really good time even if my feet were yelling at me by the night's end. 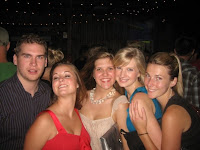 Saturday was game day as the post below explains and it was over to UCF for some tailgating fun. 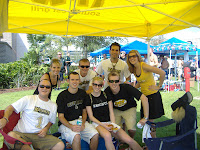 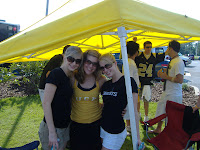 We pitched our tent and braved the oppressive heat. I didn't have a ticket which was probably a good thing because had I sat through that game all evening long only to lose in overtime I would not have been a happy camper. I'm still not because anybody can tell UCF was robbed but that's neither here nor there. The seminoles however came up HUGE! 69-0!!! As a life long Florida State fan it has been many years since we've put up points like that. The only downer was I was straining to hear the play by play on the radio and trying to pick out information in between static and salsa music. I thought I had found the game on espn360.com only to set up this elaborate tv plugged into a computer situation and find the game was blacked out even on the website. Thank goodness for Sunshine who will replay the game tonight at 7--CAN'T WAIT!! Lastly, the class-less Gators held true to form when with 25 seconds left and having all but beaten Miami, they decided to kick a field goal for the final nail in the coffin. I can't believe they would do that, but then again I can ( for those of you who find this hypocritical considering FSU put up 69 pts., keep in mind we played two QBs and were playing Western Carolina--and most importantly that I hate the gators and have the lifelong allegiance mentioned above.)

Until next time!
xoxo
2

PS That USF game was tres upsetting. Still not over it. Pretty sure it set the tone for the entire season...